Every company has a culture: a blend of values, beliefs, behaviors, systems, symbols, and habits. The culture affects the way people and groups interact within the company, with their clients, and with their investors. King's Hawaiian embodies the Aloha Spirit in all they do, an expression of caring and sharing that is an essential part of island culture. Aloha in the Hawaiian language means affection, peace, compassion and mercy.

I had the great pleasure of working with some of the folks from King's Hawaiian as well as some of the creative staff at the Buddy Group on several photo shoots. The Buddy Group is an interactive advertising agency, specializing in online marketing strategy, online video production, and web and user interface design. And what a team King's Hawaiian and the Buddy Group make! Both truly believing that collaboration and excellent customer service are the cornerstones of any successful business. 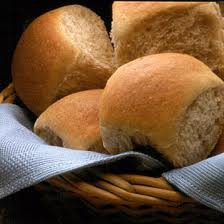 King's Hawaiian is known for its soft, fluffy, light, and delicately sweet bread and rolls. From its humble beginning in the 1950's in Hilo, Hawaii, the company grew. Because of it's huge popularity they expanded to Honolulu. Islanders and tourists alike sent loaves to family and friends in the mainland, and in the 80's King's Hawaiian came to Torrence, California, and opened a huge new bakery.

Today there products are sold throughout the US and their slightly sweet bread and rolls have become popular favorites. My 7-year-old great niece and 5-year-old nephew absolutely love this bread, and were thrilled when I brought them several loaves after the shoot. They didn't bother with butter, jam, or peanut butter, but ate the rolls right out of the package! Hmmmmm, I guess
there's something to be said for that!

All photos copyright Alan DeHerrera 2013.
Posted by Cindy Epstein at 10:58 PM No comments:

Back in the Blogger's Saddle

It's been an incredible winter and spring! I've been crazy busy food styling between San Diego and LA since my last post, and I have a been a delinquent blogger. I've been working with long-time clients and many new ones, and finally I'm back in the blogger's saddle.

When I started this blog I assumed I'd write a post as soon as I got home for a job. But alas, by the time I get home from a 10 - 15-hour day, I pretty much collapse at my desk and try to catch up on the day's correspondence before drifting off to dream land.

I want to offer up big thanks to these companies, TV stations, and brands:


And all the fabulous clients, photographers, and producers with whom I have the great pleasure of collaborating:

A great big THANK YOU to all!

Posted by Cindy Epstein at 12:53 PM No comments:

Back in the late 80's I worked as a chef on a private yacht, the Arcadia, in Ft. Lauderdale (oh-oh I'm dating myself). I could tell you a few stories that would curl your toes, but somethings are better left to the imagination. The yacht, owned by a Kentucky tycoon, was 100' long and decked out for a king. A few times a year the owner would fly down and cruise for a few days, but most of the time the yacht was chartered. The captain was a crazy drunk, making it a challenging work environment, but the guests were great.

Fast forward 23 years and I find myself food styling for Flagship Cruises.  Flagship Cruises and Events offer a magnificent fleet of luxury yachts, special events, and fabulous dining in the San Diego Harbor. 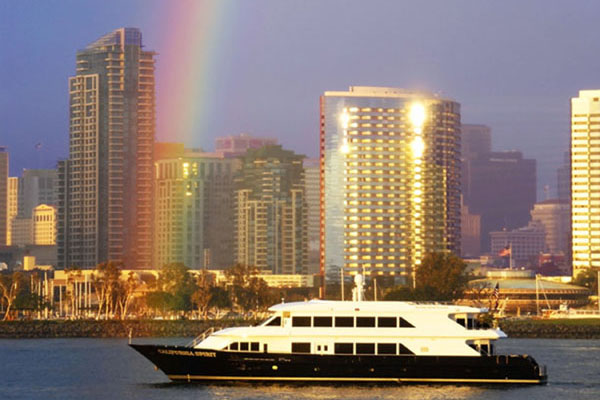 Tim Mutrie, Director of Marketing and Chef Brian Gist, the Executive Chef for all of Flagship, have created spectacular and memorable events and gourmet menus for their guests. I had the pleasure of working with them and Junvi Ola, the principal of Hospitality Content Studio on two recent photo shoots with photographer Rob Andrew.

In the photo above you can see part of the dining room on the California Spirit. What a magnificent yacht - I just  have to share a few more photos to so you can get a feel for this luxury liner. 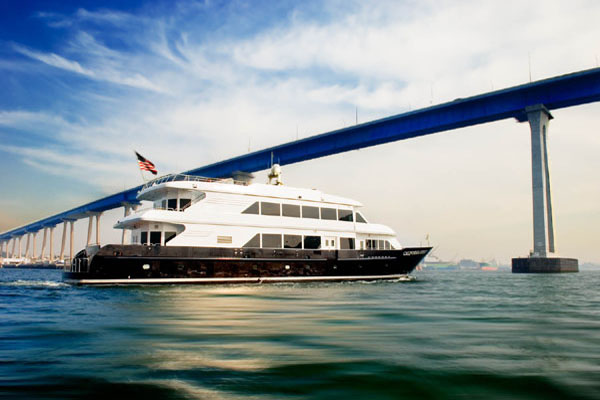 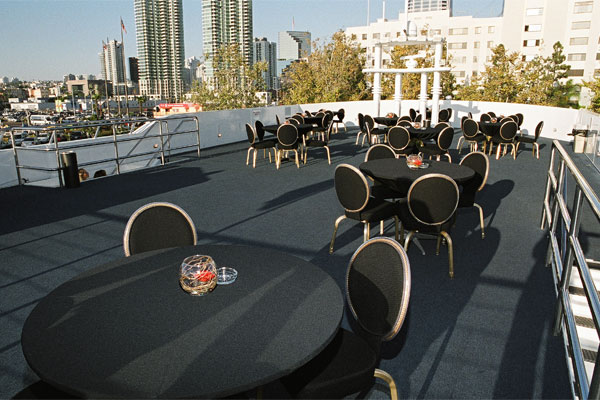 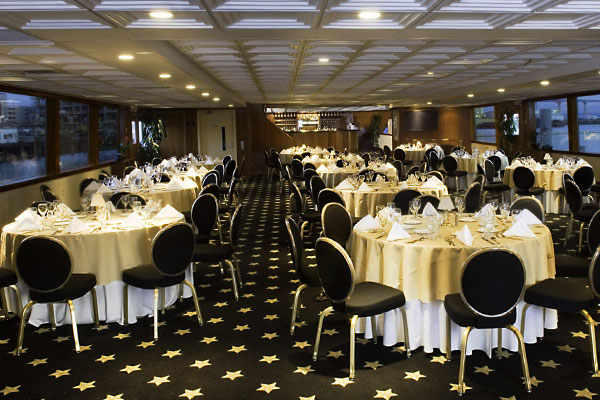 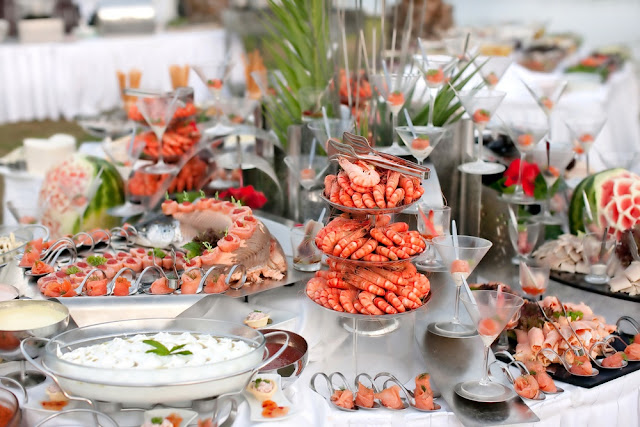 With nine outrageous food stations, the award winning Sunday Champagne Brunch Cruise is a fine way to experience this magnificent yacht. It leaves from 990 North Harbor Drive on Sunday. Boarding starts at 10:30 and she cruises from 11 AM - 1 PM.

Think Valentine's Day: they have a very special cruise planned!

Ahhhhhh! Mom's cooking naked? Did I read that correctly?

Yes you did! Debbie Adler, owner of Sweet Debbie's Organic Cupcakes, cooks naked, that is without any refined sugar, dairy, gluten, nuts, soy, or wheat. I know the first thing you're thinking, OMG! How can any dessert taste good without at least some of those ingredients? But they do!

Debbie's son was born with multiple food allergies and finding any desserts for him was near impossible, so Debbie decided to solve that problem herself. As a  long time nutrition buff she was inspired to create desserts her son could enjoy, and a bakery where children like her son, as well as those with celiac disease, diabetes, and autism could safely enjoy nutritious and healthful desserts.

If you have ever cooked for someone who has special dietary restrictions you understand the challenge. With a raised awareness today for gluten sensitivities, we're not only seeing a much larger variety of products on supermarket shelves and many ancient gluten-free grains milled into flours. Teff, sorghum, amaranth, corn, brown rice, oat, and many other varieties are readily available today, and Debbie uses a variety of them in her baked goods. (Which reminds me of my visit and tour through Bob's Red Mill near Portland, Oregon, which is another story I promise to tell.)

The good news is that Debbie is sharing her recipes in a cookbook due out in fall 2013, published by Harlequin, and when that happens I promise to share some of the photos and recipes.

Debbie hired me as the food stylist for her cookbook, which I was thrilled to do! Carl Kravats, AKA the Delicious Photographer, did the photos. Since her audience is largely moms who have children with food sensitivities, Debbie wanted the photos cupsto be colorful and somewhat whimsical and playful. What could be more fun?! I'd love to share some of them with you, but no-can-do until the book is published. But here are some of the ribbons, ties, and fanciful paper cupcake cups we used.
We had a wonderful time we had creating the images; miniature tea sets and toy dump trucks came into play. Working on an editorial project, such as a cookbook, is one of my favorite styling jobs because it offers much more creative license than a packaging shot that must be done to very precise specifications.

We had a wonderful time we had creating the images; miniature tea sets and toy dump trucks came into play. Working on an editorial project, such as a cookbook, is one of my favorite styling jobs because it offers much more creative license than a packaging shot that must be done to very precise specifications.

With Carl and I in his studio and Debbie joining us virtually we were quite a trio.  Part of the fun was Debbie's son who participated in all the calls and piped in with his two cents. It was a wonderful project! And Debbie is truly one of the kindest, most caring people I've ever met. She's a real gem! Keep your eyes open for Mom's Coking Naked this fall.

Posted by Cindy Epstein at 9:05 PM No comments:

Cindy Epstein
I love learning, reading, discovering new things, new thoughts. It's a great joy to know there's always something new to learn, and always something more to share. To see my food styling work, please visit my website at http://www.cindyepstein.com.