If you haven't been on location shooting a TV commercial, this might be a fun post for you. And for all the old timers who do this for a living, just turn the page......

A Gaffer is an electrician, sometimes head of the electrical department, responsible for the execution (and sometimes the design) of the lighting plan for a production. The gaffer's assistant is the Best Boy Electric.

To understand what a gaffer does, let's look at the entire crew and see how the players interface with one another. Did you know production companies often rent a person's home for a TV show, commercial, or film shoot? It's often less expensive than building a set for a production, so a Location Scout or Location Manager will offer the production company a number of properties from which to choose. Lisa Rothmueller, Location and Production Manager of San Diego Locations can find the best spot for anyone coming into San Diego. She's a spunky, can-do kind of gal who you can always count on. 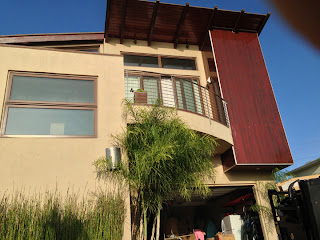 Last week we shot a commercial for Kroger in this San Diego home to introduce a new line of organic products to their stores. (Out here on the West Coast we know them as Ralph's.)

I'm sure I had the best view in the house! I set up my kitchen on the second floor patio overlooking the Pacific Ocean. Not a bad way to spend a day on location! 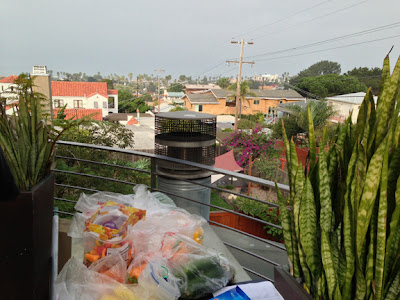 I shared the patio with Chris Andrus Lighting and his crew. He's got a fabulous group of guys who make me feel special, even though they know they're not getting any of the food I'm making for the shoot.

Grips are the technicians who handle all the lighting and rigging.

They work closely with the camera department to provide camera support, especially if the camera is mounted to a dolly, crane, or in an unusual position, such as the top of a ladder. Some grips may even specialize in operating camera dollies or camera cranes.
The second main function of grips is to work closely with the
electrical department to create lighting set-ups under the direction of the Director of Photography. Often there is a Key Grip as well as an assistant, the Best Boy Grip.


There is also the DP, or Director of Photography, who is responsible for the overall look of the production and the translation of that look to the Gaffer. 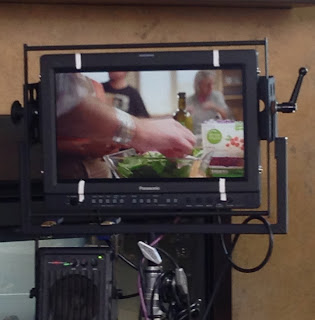 With the camera fixed on the subject, everyone can see exactly what the "camera sees" by looking into the monitor, so everything and everyone can be strategically placed to best convey the story to the eventual TV viewer.

This is an extremely important part of production because our eyes will never see the set exactly as the camera does since we can't be in the exact same angle as the lens. Nor can our eyes capture depth of field (what's in focus and out of focus). Looking at the scene through the monitor also allows the lighting to be tweaked to insure there are no unwanted shadows or glare.

The Director is ultimately in charge making sure the entire vision of the production is carried out successfully. The Executive Producer is responsible for the overall quality control of the
production, and for ensuring that final product conform to
the project's specifications. The Producer is in charge of the overall shooting and post production of the commercial (or film, TV show, etc.). He takes  the job from concept to completion and has a
creative say in the project. The Producer may have a PM or Production Manager to assist him with the managing the crew. Ticking away madly at his laptop is the Production Coordinator who handles all the paperwork for the shoot: invoices, release forms, schedules, and anything else funneling through the office. Money matters are handled by the Line Producer who usually hires the key members of the crew and is the one responsible for every line item in the budget.


The Sound Designer does the sound recording during the shoot. He will also handle the interjection of music, voice overs, or special sound effects in post production.

We Food Stylists make all the food in the shoot look appetizing on camera. I had the great pleasure of working with one of my favorite Food Stylists, Heather Bowen. Now semi- retired, Heather comes into town for her VIP clients. Working with her is a dream. She's fun, thorough, highly skilled, and a brilliant stylist. (Can you tell I'm fond of her?)....and no, we
don't shellac the chicken, but we certainly doll it up with food-safe  dyes like Kitchen Bouquet, soy sauce, bitters, and other agents.

The Prop Master searches out every single prop used in the production, and the prop tables are laden with a multitude of choices for the Director and Producers to choose from. For something as simple as a salad bowl there might be ten or more to select from: glass bowls, wooden bowls, round bowls, square bowls, large bowls, small bowls....you get the picture. The Prop Master, wanting to offer the best possible selection for the the Director and Producers will have tables of props laid out for easy selection. So now image the huge array of props needed for a commercial where the set is the kitchen! Every gadget and gismo is on those tables.

The Wardrobe Stylist(s) and Hair and Makeup Stylist(s) dress the talent/actors. The Wardrobe Stylists come with racks of clothes, steamers, irons, and a bag of tricks to customize fit. The Hair and Makeup Artists have color pallets of eye makeup, foundation, blush, brushes, blow dryers, curling irons, and everything you can possibly think of to make the talent look fabulous on camera. They are also constantly making touch ups to be sure the actors always look their best.

And then there are the Production Assistants, or PA's, who do anything that needs to be done to make shooting go as smoothly as possible. They serve as the runners or go-fers of the production, and often work the longest and hardest of anyone on the crew. God bless all the PA's, because without them, life on set would be miserable. Sadly, they often get the least credit, so here's a big fat BRAVO for the wonderful, life-saving PA's! That means you Chris Speed!


By far the most beloved people on set are Craft Services or Crafty, as they're sometimes called. They feed us breakfast, lunch, and sometimes dinner, keep us caffeinated, hydrated, and energized with every possible snack imaginable, including the ever present Peanut M&M's. They have bandaids, gum, aspirin, and breath mints for the actors. They are the "moms and dads" who take care of all of us.

So now you know what the gaffer does, along with the rest of the crew. So when you see the credits roll at the end of the film you can say, "I know what that guy does!"
Posted by Cindy Epstein at 4:00 AM

Cindy Epstein
I love learning, reading, discovering new things, new thoughts. It's a great joy to know there's always something new to learn, and always something more to share. To see my food styling work, please visit my website at http://www.cindyepstein.com.